Music For Recovery - The CD 12 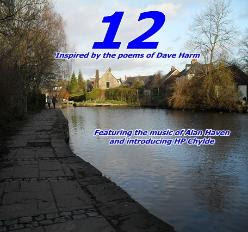 12 had been a dream of mine for many years.  As The Beatles sung With a little help from my friends this dream is now a reality.  12 is a musical CD using 12 poems of mine on recovery.  So this album has a poet, a lifetime musician, a voice of an angel, and a creative talent that changed words to lyrics and made poems music.

The rock band The Who once sung, It's the singer, not the song, that makes the music move along.  What a wonderful way to explain what this album is about.  I have been writing poems for over ten years and it has always been a dream of mine to have my poems converted to song.

The 12 Dream Team
Alan Haven - every mix on this CD to every instrument played was done by Alan.  He had been performing for over 50 years and the music flows because of him.  Alan passed away in early 2016, this is his last collective work on a full original CD.  Just listen and be amazed with his talent.  Early on I got to sit in the studio with Alan and watch the ideas come to life and had the feeling that "12" was going to be a masterpiece.

K.C. - wishes to remain anonymous for this project... yet everyone involved knew that they needed to protect their work on "12." So K recognized that some anonymity had to be sacrificed.  K was responsible for turning words into lyrics and many of the melodies were K's creation.  I put my trust in K and took their advice on what path we would go and for me it was the best decision I could have made.

HP Chylde - the angelic voice on 12 was recommended by both K and Alan.  Every time I got a new song to approve, I was in shock with how easily HP could change from one style to another and lose nothing from her voice.  I also loved the way she read The 12 Steps.  You can hear how Americans and English say words differently... yet like recovery... we understand.

Email ThisBlogThis!Share to TwitterShare to FacebookShare to Pinterest
Labels: music