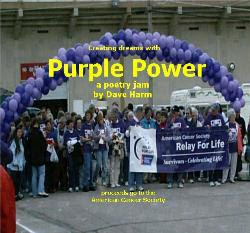 The New Age, Jazz, Blues, and Contemporary music of Kevin MacLeod combined with a dozen of Dave Harm's poems on cancer create a unique gift for the survivor and their family.  Spiritually uplifting.  An inspiration for anyone affected by cancer.

Listen to Harm read his poem Day One to the tune Aitech.  This is Dave Harm's favorite poem.  He wrote it shortly after his ex-wife was diagnosed with breast cancer.  It has the distinction of being the only poem ever shown on the front page of the Beatrice Daily-Sun newspaper and it also appears in his book Damaged Merchandise.  Or listen to him read his most popular poem Relay For Survivors to the song Shades of Spring.  This poem has been read throughout Southeast Nebraska at different Relay For Life events, as well as parts of Canada.  In 2006, it appeared in a fund-raising book in Clio, Michigan.

12 original songs along with 12 poems written and read by Dave Harm, as well as survivor Betty Rohr.  The two other readers are a child of a survivor and a young lady who has lost family members because of cancer.  Ranging in age from 17 to 50, the readers symbolically show that cancer doesn't care how young or old you are, or whether you are a male or female.


A warm welcome for Purple Power... with an awesome review

On the 12th of January 2004, Purple Power had its official unveiling at the kick-off for the Gage County Relay For Life event.  Everyone seemed excited by the idea and a few CDs found their way into new homes!

After the event I received an e-mail from Corrine Koch of Beatrice, Nebraska who shared her thoughts after her first listening to the CD.

"I bought one of your Purple Power CDs on Saturday at the Relay kick off and just got done listening to it.  What a beautiful CD!!  My husband was diagnosed with non-Hodgkins in Sept., 2001 and died in Oct., 2005. It was four years of fighting but sadly, God needed him more.  When listening to the CD it brought tears just thinking about all we went through also.  The CD expresses the fears, hopes, emotions,  etc., of all cancer patients and their families.  Thank you for putting all of them into words.  The music added fit the emotion. What a beautiful combination.    I hope the CDs will sell, once people listen to it I can't imagine them not selling.   I'm glad your wife is doing well and I pray that she continues to have good checkups."

All the publicity in the world, can't match a warm letter like this.  It is because of people like Corrine, that the dream of Purple Power came to life.

Other comments; "Sounds like Mannheim," TR (has lost family members to cancer)
"Awesome! Can't wait to own one." SK (ACS employee)
"She sounds so natural."  RD speaking about Lisa reading the poem Our Heroes"Really good poems and excellent music." JP recording supervisor

Available for sale at these on-line stores, as well as many others
iTunes
Amazon
Google

Email ThisBlogThis!Share to TwitterShare to FacebookShare to Pinterest
Labels: music